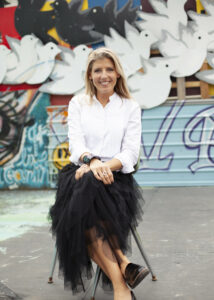 Interested in going to law school? Look no further! Emily Pelphrey is the Knowlton Center’s new pre-law career coach and the person to talk to for everything pre-law. While Emily currently serves as a resource for students looking to pursue a law degree after graduating from Denison, Emily herself was actually a Denison student back in the day.

Emily transferred to Denison as a sophomore. Part of the reason that she came to Denison had to do with her family, many of which had graduated or taught at smaller Ohio schools. During her time at Denison, she ran track and field. She enjoyed being part of the student athlete population and felt that her team gave her a community to be a part of.

Emily pursued a B.S. in Psychology at Denison. Her mother was a social worker and Emily grew up witnessing the field hands-on. She knew that she wanted to help kids and families like her mother did, but she wasn’t sure what form that would take. As a senior, she took the Law School Admissions Test (LSAT), did well, and was accepted to Suffolk University Law School. Emily didn’t take a gap year (mainly because gap years weren’t as common in her time) and upon graduating from Denison, entered Suffolk the following fall.

While she had always been appreciative of her Denison experience, it was at Suffolk that Emily truly began to realize the value of her Denison education. She didn’t know what she wanted to do with her life before attending Denison; it was at Denison that she realized she wanted to go to law school. And similar to how it is now, Denison was a good school with a high-standing; the school’s name carried weight. “It gave me immense pride,” Emily says when talking about wearing her Denison sweatshirt around Suffolk University. Emily loved law school and looks back fondly on her time there. She claims that the critical discussions and academic banter were her favorite parts of law school.

After completing her law degree at Suffolk, Emily came back to Ohio where she worked at the Summit County Juvenile Court. One of her duties there was to argue on behalf of child services if a child had been removed from their home. She spent six months at the Summit County Juvenile Court before transitioning to the Felony Courtroom. It was there that she served as a domestic violence prosecutor on cases ranging from low to high degree felonies.

Following her time in the Summit County Felony Courtroom, Emily joined the Ohio Attorney General’s office where she worked for 14 years. She traveled around Ohio as a special prosecutor, going to different Ohio counties on the invitation of county prosecutors. Across those 14 years, Emily prosecuted on hundreds of cases and counseled hundreds of people. One of her most memorable cases she cites as the Ohio Craigslist Killer. Some of the cases she prosecuted on even made her wonder, “What is justice?”

Emily applied for the pre-law coach position at the Knowlton Center because she believed that she had fulfilled all the things she had wanted to do in her professional career as a prosecutor. She chose to return to Denison because, in her own words, “I wanted to benefit the university that gave me so much.” Emily believed she was meant to come back to Denison to teach students how to be good lawyers.

When asked about what advice she would give Denison students interested in law school, Emily says, “Go into law with a purpose.” She admits that there are plenty of “bad” lawyers already out there, people who lack passion or who go into the field with ulterior motives. One of the things she hopes to do as the pre-law coach is encourage passionate, well-rounded students to apply for law school. “The greatest joy I could have from this is have a students come back in 5-10 years and say that I made a change in someone’s life,” she says.

Get more advice from Emily! Schedule an appointment with her on Handshake or call the Knowlton Center at 740-587-6656.