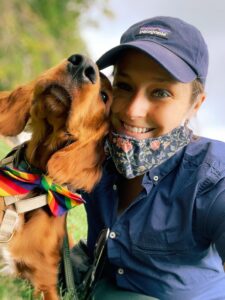 Following her graduation from Denison, Kinsey immediately enrolled in a Master’s program and got her Degree in Cognitive and Social Processes from Ball State University to complement her Bachelor’s Degree in Psychology. She then went on to acquire a Ph.D. in Industrial Organizational and Human Factors Psychology from Wright State University. While pursuing her Ph.D., Kinsey also held a position as a Research Associate in the Behavioral Research group at Disney Research. Kinsey’s extensive experience in psych-related fields made her an ideal candidate to become a psychology professor and in 2019, she was hired as an assistant professor at Northern Kentucky University, where she continues to work today.

At Northern Kentucky University, Kinsey teaches several core courses in the university’s Master of Science Industrial Organization program. Outside of teaching, she also works as an applied organizational research scientist and consultant for NeuroStat Analytical Solutions. Her research focuses on improving current measurement approaches in the field of organizational research, particularly in the areas of workplace discrimination, DEI, scale validation, and methods of personnel selection.

Kinsey’s path to being an assistant professor was anything but clear-cut. Entering Denison as a freshman, she was a declared Biology major pursuing a Pre-Med path with the goal of becoming a physical therapist. Her path changed after taking a psychology course with Dr. Hutson-Comeaux. As Kinsey says, “This class challenged me as much as it intrigued me. Although I didn’t entirely understand it at the time, I think that learning how to design studies to investigate and shed light on real-world problems felt incredibly empowering.” Upon completing the course, Kinsey immediately switched majors from Biology to Psychology. Throughout her time at Denison, she worked with Dr. H-C as a research assistant.

Kinsey found her Denison education to be extremely valuable and helpful in pursuing a career as a college professor. In her own words, “It was essential in forming the foundation of knowledge that I still pull from in my daily work. The liberal arts education that you receive at Denison, regardless of your major, teaches you how to intellectually engage across disciplines, and navigate the complexities of the social world.”

Here’s Kinsey’s advice to current Denison students: “I think one piece of advice that would have helped me, particularly as I was just beginning my graduate school career, is that it’s okay to take a non-linear path, and it’s okay to not always know where you’re going. I think the idea that linearity is the norm in terms of career paths is a misconception that causes a lot of undue stress!” She also adds, “Take advantage of ALLLL that Denison has to offer while you’re there.”

Connect with Kinsey on LinkedIn