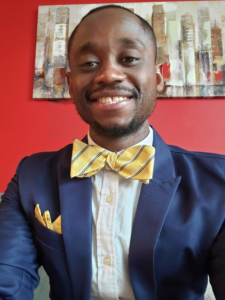 Meet Joseph Butler, a Denison alum who graduated in 2010. At Denison, Joseph studied English Literature, Communication, and Black Studies. On top of his busy academic schedule, Joseph was also involved with DCGA, the Black Student Union, and Phi Beta Sigma Fraternity. Following graduation, he went on to pursue both a Master of Arts in Sociology at Roosevelt and a Doctorate of Philosophy in Sociology at Loyola University Chicago.

When at Denison, Joseph believed that he was going to become an English professor. It wasn’t until graduate school that he realized what he really wanted to do with his future. When talking about his time at Loyola University, Joseph says, “I realized I could maximize my impact by serving in an administrative role in higher education.” Utilizing skills he developed at Denison combined with his newfound purpose, Joseph found his calling in higher education.

Joseph currently works as the Director of Student Success at North Park University in Northside Chicago. The Office of Student Success houses First Year Student Experiences, Career Services, and the COMPASS program (a bridge program for provisionally admitted students). He also serves as a Founding Partner for a marketing and PR firm called Citizen Group Media, LLC. Citizen Group Media works with schools, non-profits, and political clients. In talking about Citizen Group, Joseph says, “I can boldly advocate for change without the fear of losing my livelihood and compromising my integrity.” His two jobs allow him to channel his interests and passions into two different outlets.

Joseph looks back on his time at Denison with fondness and gratitude. He says, “Thinking about new and creative ways the things I learned at Denison apply to my professional experiences.” Denison provided him with transferrable skills that have aided him in his professional journey. He capitalized on the opportunities presented to him and set himself up for success. Joseph especially wants to encourage Denison students involved with Greek Life, Black Student Union, DCGA, DCA, or La Fuerza Latina (some of these groups he himself was a part of) to do this and, “take advantage of any and all professional development opportunities and certifications as these will be invaluable to your journey.”

Opportunities for growth that present themselves at instances of failure are valuable, according to Joseph. He believes that failure is something that doesn’t need to be feared. “Anticipate and create opportunities for growth and development,” he stresses. Joseph also highlights the importance of mentorship in professional development. He suggests individuals should seek out mentors at every stage in their career.

Joseph is yet another example of what we call an alumni success story, alums who have found their calling and are able to synthesize their experiences into meaningful professional advice. Joseph’s final words of wisdom to Denison students: “I would advise all students to take a risk at discovering their passion and pairing it with opportunities to make a living. Starting with what you love and building from there will make all the difference in how you persevere.”

Connect with Joseph on LinkedIn