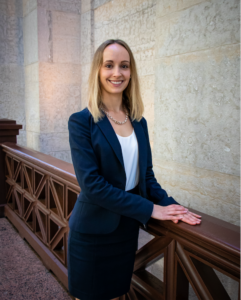 Meet Julia Wynn, a Denison alum who has found her calling in government affairs. Julia graduated in 2014 with a double major in Communication and Sociology. During her time at Denison, she was also involved with dance team, Greek life, and she studied abroad in South Africa her junior year.

Although Julia has had countless experiences in government affairs job positions, she did not always know what she wanted to do as a career. She decided to major in two fields that she found interesting, which is how she began gaining meaningful work experience. She says, “I ultimately decided to choose major fields that I thought would simply be interesting to study, and figured I’d try to do as many internships as possible to try out various career fields in the meantime.” Her dedication and drive paid off; the summer going into her junior year, Julia was hired as a policy and legislation intern at a DC environmental law firm. She says, “I was immediately drawn to the activity taking place there, and the feeling of being a part of making a real difference in people’s lives through policy. That was the moment that I knew I wanted to work in lobbying.”

Upon graduating from Denison, Julia has pursued a number of experiences in government affairs. She has worked as a legislative fellow for two separate organizations. She spent several years working in different positions in the Ohio House of Representatives, including running the office of Ohio State Representative John Boccieri. Currently, Julia works as the Director of Government Affairs for the Government Advantage Group, an Ohio lobbying firm. At the Government Advantage group, she helps associations, companies, and groups build a presence at the Ohio Statehouse while advancing their legislative goals at the state government level.

Julia believes that young people should not have to know what they want to do with their lives as high school/college students. She stresses the importance of experience in determining what someone should pursue as a career. She implores young people, “Explore as many part-time jobs, internships, externships, work shadowing opportunities and other career explorations as you can while you’re in high school and college. The only way to know if you’d enjoy doing something (or won’t) is to try it.”

As a professional lobbyist, Julia thinks that the ability to network is key for the field of lobbying. She emphasizes that the relationships you build with individuals (especially legislators) play a crucial role in the lobbyist hiring process. She suggests meeting and introducing yourself to as many people as possible because many people have connections you do not know upon first meeting them.

Julia’s advice to current Denisonians: “Feel comfortable messaging strangers on LinkedIn to ask to talk about their work. Most people are happy to provide advice to younger professionals who are genuine information-seekers (just don’t make any hard asks too early!)” As one of those individuals who messaged Julia as a stranger just a few short weeks ago, I am very grateful that I did. In learning about her amazing career path thus far, I was able to see all the different jobs that are available to people interested in government (me being one of them). It’s never too early to start reaching out to alumni in fields you are interested in, you just may learn something!

Connect with Julia on LinkedIn